She is recognized as the most dominant female swimmer in the history of the Wellsville High School swim program. 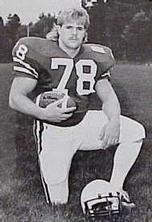 He has served the youth of the Wellsville Community very well the past 15 years coaching small court basketball, Little League Baseball, midget football, and Cinderella Softball.

Is recognized as one of the top 5 catchers of all time. 354 career average while having only 3 errors in 44 games

Hit a massive home run in the 1984 semi finals vs. Mynderse that literally put Wellsville baseball on the map, ‘The shot heard around the world’

Went on to play college baseball at division I St. Bonaventure for 1 year before playing 3 years at R.I.T. where he was their starting catcher

Was the winning pitcher on the 1984 high school baseball team that won Sectionals. He was selected as the game MVP.

In his high school baseball career he still holds the record for the most wins in a 3 year career with 26.

As a great athlete he was selected as an all-star in 3 different sports: soccer, basketball, & baseball.

In 1985 he received the USMC Distinguished Athlete Award as well as the Terry Norris Award.

At the college level he played two years of baseball for the Finger Lakes Community College where he had an excellent career.

She had the distinction of playing on the varsity level in four different sports: soccer, volleyball, basketball, and softball.

Her senior year she was chosen as the Section V most valuable player in volleyball.

Her senior year she was awarded the U.S. Army Scholar Athlete Award, the Sid Miles Award as the top female athlete, and the Terry Norris Award.

Played 4 years of volleyball at Alfred University where she was selected captain of her team her senior year.

She is recognized as an outstanding athlete no matter the sport. Since high school she has become a top-notch bowler and golfer.

Scored over 1000 points and current holder of the single game scoring record with 42 points.

Selected to the “Big 30” both junior and senior year and MVP of the Stuben AA-A All Stars senior year.

Perhaps one of the finest mens basketball players to ever wear a Wellsville uniform.

Attended and graduated from Mercyhurst College on a “Full Ride” athletic basketball scholarship.

Was an All League Selection in soccer and baseball during his high school career Team M.V.P. his senior year in baseball earning a baseball scholarship to Salem College

Recognized as a leader of men by being elected as captain of his high school soccer and baseball teams, as well as his college baseball team

Set two records in high school soccer career: most points at 102 and most goals at 43