Diane Hamlin Katerelos, 68, a resident of Wilmington, NC passed away on Wednesday, June 16, 2021 following a brief illness. She was born December 13, 1952, the daughter of the late Donald and Ethel (Maxine) Hamlin. Diane was raised in Wellsville, NY and graduated in 1970 from Wellsville High School. After graduating from Central City Business Institute in Syracuse, NY; she worked for John Hancock Insurance in Clearwater, FL. They owned and operated a restaurant in Clearwater, FL and then settled in Wilmington, NC where they resided since 1987 as a restaurant owner until a few years ago. Most recently, she worked in the Child Nutrition Department at Snipes Academy in Wilmington. She enjoyed playing Bingo when her Mother visited and stayed; and loved spending time with her daughters and grand-daughter. Diane is survived by: her two daughters, Christina Hendricks and Stephanie Katerelos, and her granddaughter Sydney Hendricks. She is also survived by her brother Lon (Kathy) Hamlin. There will be no service at her request.

Drusilla Carter Harris of Edwards died Sunday at Vail Valley Medical Center after a brief illness.  ‘Dru,’ as she was known, was born Feb. 2, 1952, in Dallas, the daughter of George B. and Elizabeth Carter Harris. After graduating from Wellsville High School in New York and attending St. Lawrence University, she studied and participated in theater in New York City for several years before moving to Colorado in 1975.  In Vail, Harris was a ski instructor and an accomplished horsewoman. She won man Western States championships with her horse, Boomer. Harris traveled extensively to participate in equestrian activities around the world.  She is survived by her mother and stepfather, Betty and Bob Taylor of Hilton Head, S.C.; brothers George (Mary) of Alfred, N.Y., Donald (Joyce) of Aspen, Christopher of Boulder, and Jeffry (Leslie) of Greenwich, Conn.; her aunt, Elizabeth O. Harris of Wellsville, N.Y.; and numerous nieces, nephews and cousins.  A private service will be held in Vail this week and a memorial mass will be performed at 11 a.m., Thursday, at Immaculate Conception Church in Wellsville, N.Y.  Memorial suggestions include the charity of one’s choice or the SPCA.

John “Jack” O’Hara, Jr., 68, a former Wellsville resident, passed away peacefully on March 2, 2020 at his home in Calabash, N.C., surrounded by his loved ones. Jack was born on December 8, 1951, in Wellsville, the son of the late John and Bonnie (Weihonig) O’Hara.  Jack was a graduate of Wellsville High School. He worked as a painter with his father, and later for the Conrail and Norfolk and Southern Railroad for over 30 years. He enjoyed riding his Harley, his snowmobile and watching NASCAR. He was a member of the Wellsville Elks Lodge 1495 for over 40 years.  He is survived by his wife Olive; three daughters, Wendy Gorham, Jennifer (William) Thornbloom and Sarah (Tony) Horswill; three step-daughters, Lisa (Chris) Shwier, Tina (Brian) Harris and Barb (Mike) Straight; as well as many grandchildren.  Jack was predeceased in addition to his parents, by a sister, Deborah O’Hara; and his dog, Stone.  A Memorial Mass and Celebration of Life will be held at a later date, in Wellsville. Those wishing to make a donation in Jack’s memory might consider the SPCA Serving Allegany County.

Sheila Kay Oliver, 66, formerly of Wellsville, entered into the waiting arms of Jesus on Friday (March 1, 2019) following a courageous battle with cancer.  Sheila was born on March 13, 1952 in Wellsville to Ralph and Geraldine “Geri” (Smith) Hills. She was a 1970 graduate of Wellsville Central School. On Nov, 28, 1972, in Las Vegas, N.V. she married the love of her life, Paul Oliver, who survives.  Her spiritual journey began in 1973 through the impact of a movie, “A Thief in the Night” and culminated in her giving her heart to Jesus through the reading of the family Bible. Her husband joined her on that journey in 1977 through her witness and accepting her invitation to attend the church next door.  Sheila devoted her life to the raising and homeschooling of her three children. She also played a very active role in church ministry. She was a worship leader for 35 years where she utilized her talents for the Lord in writing and composing worship songs. She co-pioneered with her husband the founding of Gavlin Hills Community Church in Gavlin, Calif., Beth Sincha Church in Riverside , Calif. and Shiloh Messianic Congregation Church in Crestline, Calif. and also in Cali Mesa, Calif.  In addition to her husband, Paul, Sheila is survived by three children, Jesse Paul Oliver of Park City, Utah, Jolene (Jeremy) Burdick and Jonah (Brenda) Oliver, both of Flagstaff, Ariz.; her father, Ralph Hills of Wellsville; two sisters, Janet Wesche O’Loughlin and Carole Rich, both of Calif.; two brothers, Brian Hills and Alan Hills, both of Wellsville; five grandchildren, Ezra Grace Burdick , Noah Burdick, Sadie Oliver, Reese Oliver and Silas Oliver; and several nieces, nephews and cousins.  In addition to her mother, Geri Hills, she was predeceased by a brother, Kevin Hills. Sheila wasn’t afraid of anything. She was willing to attempt anything for the Lord and with her friendly outgoing personality, she easily made many friends. An example of this was the Christian Temple Coffee Hour she started years ago and continued for many, many years.  A memorial service will be held on Saturday (April 20) at 3:00 p.m. at Grace United Church in Wellsville with Rev. Carol Stewart of the St. John’s Episcopal Church officiating.   Memorial contributions in Sheila’s name may be made to Allegany County Cancer Services, Attn.: Lori Ballengee, 100 South Highland Ave., Wellsville, NY 14895 or to Grace United Church, 289 N. Main St., Wellsville, NY 14895. 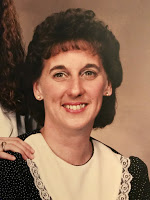 Sharon L. Greene of Pine Street passed away on Thursday, July 13, 2017, at the Comfort House of Allegany County. She was born on October 6, 1951 in Wellsville to Matthew and Gertrude Shine O’Brien. On January 15, 1972 she married Gregory Greene who predeceased her in 2007.  Sharon was a member of the Wellsville High School class of 1970 and had also graduated from Alfred State College in 1972. She had been a resident of Lima where she had worked in the Lima High School Cafeteria for several years. Sharon later moved back to Wellsville where she worked in a Doctor’s office and later for the Giant Food Mart in the Deli Department. She was a member of the Immaculate Conception Church of Wellsville who enjoyed being on the go. Sharon loved to travel, especially with Sylvia LaChance and Lorraine DiSorbo who also helped during her long illness, bunco, and gardening. To Sharon family was everything and she will be remembered as a very prompt woman who enjoyed a spotless home.  Sharon is survived by her mother, Gert of Wellsville; a daughter, Kelly (Sam) Buck of Mattydale; 2 sons, Greg (Angela) Greene serving in the U.S. Navy stationed in Norfolk, VA., and Jeremy (Carmen) Greene of Milwaukee, WI; 5 grandchildren, Zack, Chandler, Christopher, Colton, and Cataleya; a brother, John (Lisa) O’Brien of Ruidoso, NM.; several nieces, nephews and cousins. Sharon was predeceased by her husband Greg, her Father, Matt, her daughter, Kristen, and her sister, Sheila.Friends are invited to call on Monday, July 17, from 6 to 8 pm at the J.W. Embser Sons Funeral Home in Wellsville. A Prayer service will be held on Tuesday, July 18, at 10:30 am in the funeral home followed by a Mass of Christian Burial to be celebrated at 11 am in the Immaculate Conception Church. Burial will take place in Sacred Heart Cemetery and memorials in Sharon’s name may be made to the Comfort House of Allegany County, East State Street, Wellsville, NY.  14895. 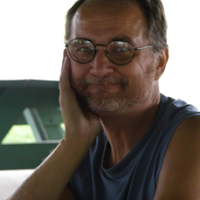 David M. Clark, 64, formerly of South Brooklyn Avenue, passed away on Wednesday, May 18, 2016 at Geneva General Hospital following a long illness. He was born March 5, 1952 in Wellsville, the son of the late Wesley and Rosemary (Gibalski) Clark.  Dave was raised in Wellsville and graduated from the Immaculate Conception School, Wellsville High School in 1970 and Corning Community College. He was formerly employed at Metalade in Rochester and was an over the road truck drive for many years. He was a member of the Immaculate Conception Church and volunteered at the Catholic Charities Food Pantry in Wellsville.  He is survived by a daughter, Kelsey Clark of Wayland, two sisters, Rosemary Hurd of Wellsville and Kelley (Fred) Rowan of Henrietta, and one brother, Stephen (Donna) Clark of Dansville, four nieces & nephews, Andrew Hurd, Rosemary Hurd, Kathryn Rowan and Kevin Rowan, two great nephews, an aunt, Jane Parker of Wellsville and many cousins.  Friends are invited to visit with the family on Tuesday, May 24, 2016 from 2:00 to 4:00 and 7:00 to 9:00 pm at the J. W. Embser Sons Funeral Home Inc. in Wellsville. A Mass of Christian Burial will be celebrated on Wednesday, May 25th at 11:00 am at the Immaculate Conception Church in Wellsville. Burial will be in Sacred Heart Cemetery. Please consider memorial donations to the Lewy Body Dementia Association at www.LBDA.org

John S. Hurd, age 64, of the Bolivar Road passed away at home on Friday February 26, 2016 at home. He was born on December 15, 1951 in Wellsville to Henry and Reba Baldwin Hurd. On August 19, 1972 in Wellsville he married Rosemary J. Clark who survives. John graduated from Wellsville High School and Alfred State College. He was a machinist who had worked for Kodak in Rochester, RDJs in Lancaster and for ICI in Lima. He retired in 2005 and in 2007 he and Rosemary moved back to Wellsville. John enjoyed working on and restoring cars at his home. He adored his wife, loved his family and enjoyed spending time with his grandsons. Surviving besides his wife are a son, Master Sergeant Andrew J. Hurd stationed at Elgin Air Force Base in Fort Walton Beach, FL.; a daughter, Rosemary T.J. Hurd of Wellsville; 2 grandsons Aidan and Elric McCollumn; 2 sisters Cheryl Wasar of Phoenix, Az. And Cynthia Hurd of Phoenix, AZ.; several aunts, uncles, cousins and nieces and nephews, 3 brother in laws and 2 sister in laws.
Friends are invited to call on Tuesday, March 1, from 2-4 and 7-9 pm at the J.W. Embser Sons Funeral Home in Wellsville. A funeral service will be held on Wednesday at 11 am in the funeral home. Burial will take place in Woodlawn Cemetery and memorials in John’s name may be made to the Wellsville Volunteer Ambulance Corps. 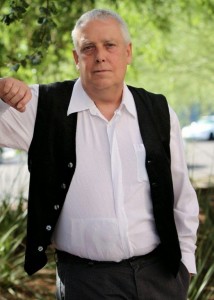 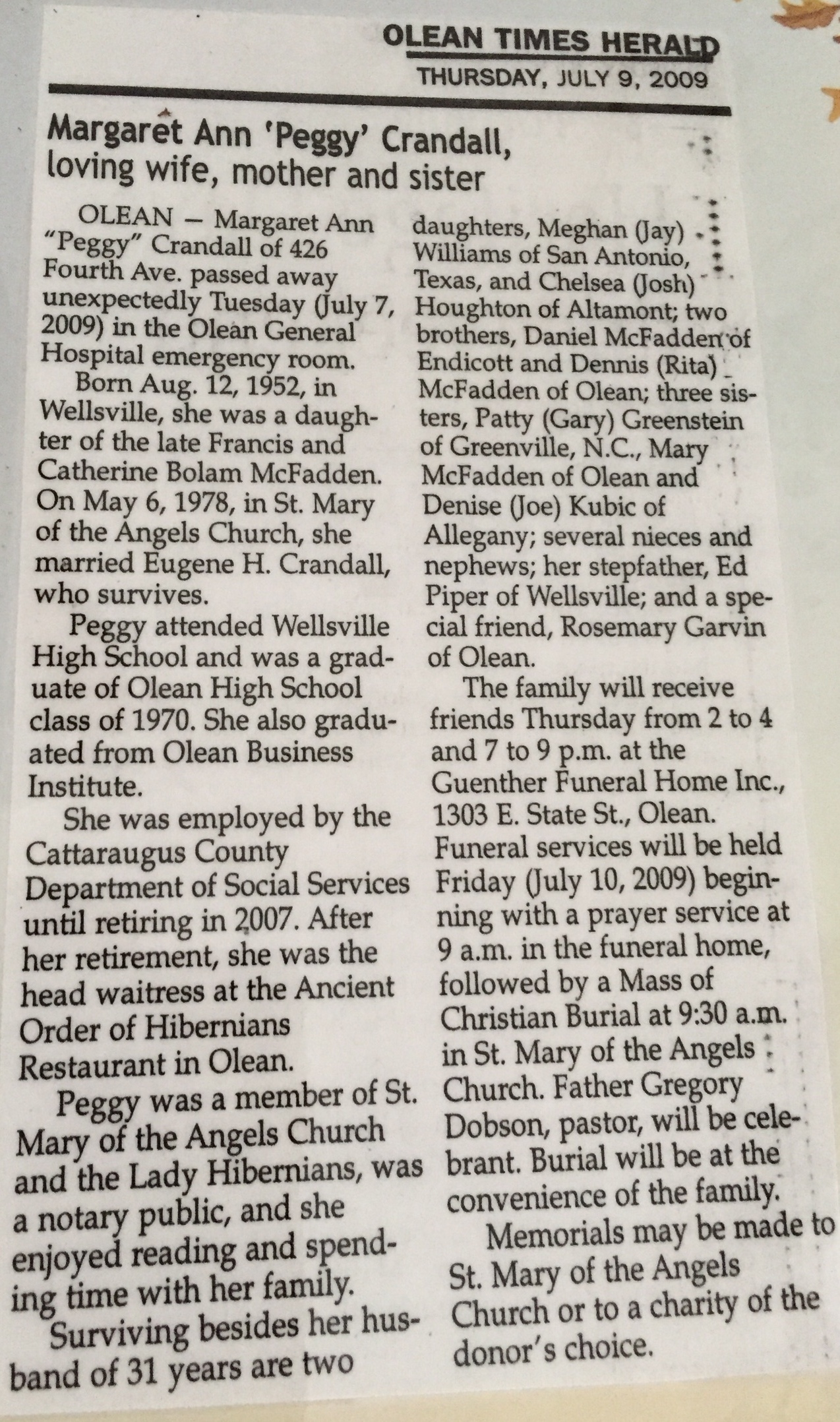