Paul E. Bailey, 73, of Jacksonville, N.C., passed away on Thursday, July 4, 2019 of a lengthy illness.  Paul was born on Jan. 27, 1946 to Raymond L. Bailey and Lila M. Hoover of Piqua, Ohio. In Paul’s younger teen years, he was raised by his loving, caring parents Mack and Doris Miller of Wellsville. Paul graduated from Wellsville High School in 1964. Paul married Judith A. Clarke of Independence on Aug. 17, 1968 at the Independence 7th Day Baptist Church. They have three children, George T. Bailey of Andover, Cheri L. (Richard) Kornaker Jr. of Holly Ridge, N.C., Jeremy P. (Crystal) Bailey of Jacksonville, N.C.; eight grandchildren, Christopher, Thomas, Beth, Crystal, Brittany, Rebecca, Robert, and November; and seven great-grandchildren. Also surviving are his sisters, Alice A. Meyers of Andover, Janice Bailey of Florida; brother, David Bailey of Florida; sister-in-laws, Norma (Floyd) Drake of Independence, Sharon Clarke of Mariposa, Calif.; brothers-in-law, Samuel (Lori) Clarke of Wellsville, James Deck of Wellsville; along with several nieces and nephews.  Paul worked at Worthington (Dresser Rand) for 30+ years. Paul’s hobbies after work was going to the horse farm to ride his horses. In 1999, Paul retired and moved to North Carolina where he volunteered at horse farms to work with the horses that needed training. Paul’s passion included his family, dogs (Troubles and Heidi), horses, and the beach. Paul was a fun, loving man that will be missed dearly by all.
Predeceased are his parents; three sisters, Pricilla A. Miller-Perry, Diane R. Miller-Rosetti, Betty A. Miller-Deck; two brothers, James Bailey and Chuck Bailey; brother-in-law, Robert Clarke and sister-in-law, Deana Clarke.  The family will have a Celebration of Life on Aug. 17, 2019 at the Andover Community Center at 1 p.m. Come share your memories with us.

Larry E. DeMarte,  Parma – Sunday, January 13, 2019 at age 72. Survived by his loving and devoted wife of 49 years, Trudy DeMarte; his best friends and sons, Eric (Jodi) DeMarte and David (Jessica) DeMarte; his pride and joy grandsons, Jacob and Zachary DeMarte; his loving sister, Diane Scirto; many loving nieces, nephews; grand-dog, Otis, many family members and dear, dear friends. He is predeceased by his parents, Ralph and Wilma DeMarte; his brothers, Thomas (Judy) and Michael DeMarte.  Larry was born in Wellsville, NY, a proud veteran of the United States Army and served our country during the Vietnam War. He retired as a production manager at GM after 30 years. Larry had a passion for the game of football, he enjoyed golf, fishing, jet-skiing, boating, snowmobiling and reading the newspaper. He loved spending quality time with his family, especially his grandchildren. He would do anything for anyone and will be deeply missed by all who knew him.  Larry’s visitation will be held on Tuesday, January 22nd 1-3 PM where his celebration of life will be at 3 PM at Vay-Schleich & Meeson 1075 Long Pond Rd. In lieu of flowers, contributions may be made to Veterans Outreach Center or in his memory.

Edith M. “Tookie” Cole, 69, of Wellsville, N.Y., died Sunday (April 9, 2017) in St. Mary’s Hospital, Leonardtown, Md.  Born Nov. 26, 1947, in Wellsville, she was the daughter of Charles and Lillian Brown Carlin. She was married to James Cole, who predeceased her in 2000.  Surviving are a son, Andrew (Suzanne) Stocking of California, Md.; two grandchildren; three siblings, Wanda Nelson of Portville, N.Y., Ted Carlin and Judd Carlin, both of Alma, N.Y.; nieces and nephews.  In addition to her husband, she was predeceased by her parents; and four siblings, Ben Carlin, Ned Carlin, Frank Carlin, and Carol Norman.  Friends may call Friday (April 14, 2017) from 6–8 p.m. at the Mulholland-Crowell Funeral Home, Wellsville, N.Y., where Funeral Services will be held on Saturday at 11 a.m. The Rev. Carl Kemp will officiate. Burial will be in Fairlawn Cemetery, Scio.

The Belmont Dispatch, Thursday ~ August 6, 1964
Samuel Chrimes of Wellsville, son of Mr. and Mrs. T. Dudley Chrimes, was killed Sunday, August 2, 1964, when the car in which he was riding left the road and overturned. Two others in the car, Leon James Cole, Jr., the driver and Philip Duke, both of Wellsville are hospitalized with injuries.
Survivors, besides his parents, include a sister, Mary Lou Chrimes, a student at Ithaca College; and a half brother, Theodore Chrimes of Williamsville, and a half sister, Mrs. Lucretia Green of Geneseo.
Funeral services were held Wednesday in the Dye and Wildman Funeral Home at Wellsville with burial in Woodlawn Cemetery 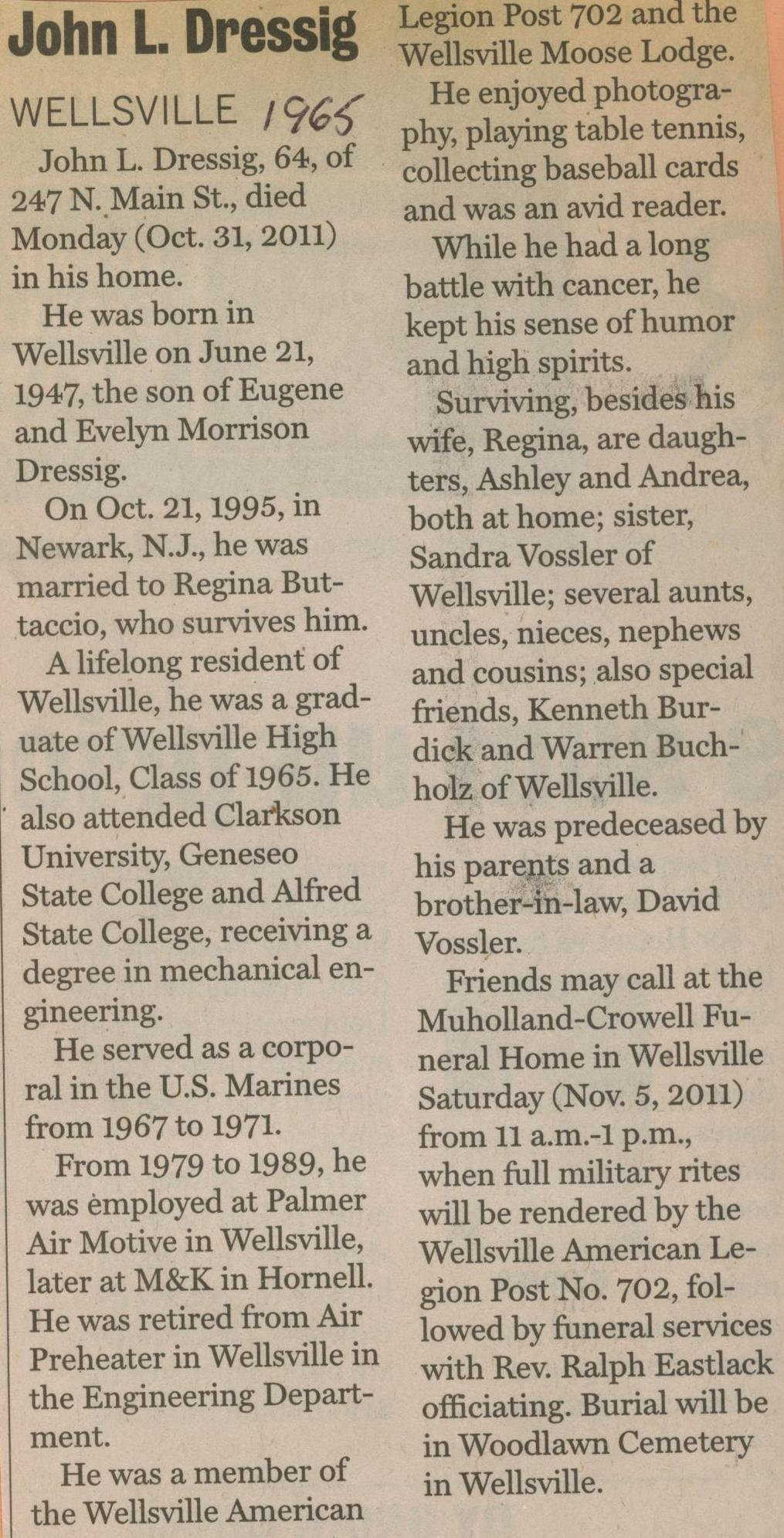 Terence K. “Terry” Worden, 66, of 66 Oak St., passed away late Sunday afternoon (Sept. 18, 2011) St. James Mercy Hospital in Hornell. Born in Wayland on June 28, 1945, he was a son of the late Kendell and Claudia Woods Worden. He was married in Hornell on Dec. 20, 1975 to the former Marcia Morabito, who survives. A former resident of Wellsville, Terry was a graduate of Wellsville High School and proudly served his country with the U.S. Army. He has resided in Hornell for most of his life and was employed for many years as a pattern cutter for the former Marion Rohr’s in Hornell; later he was employed by Alstom. Terry was a former member of the Hornell Moose Lodge No 210. His family includes his wife of nearly 36 years, Marcia; his son Danny (Sharon) Worden of Wellsville; his two daughters, Connie Worden of Ithaca and Cindy (Danny) Hachtel of Avoca; his five grandchildren and seven great-grandchildren; his two brothers, Roger Worden of Elmira and Alan Worden of Dansville; also his two nephews. Calling hours are from 11 a.m.-1 p.m. Wednesday at the Bishop & Johnson Funeral Home, Inc., 285 Main St., Hornell. Committal services and interment, with military honors, will be at 2 p.m. Wednesday at the Bath National Cemetery.

Linda M. Cumpston, 56, of 19 Pine Street Apt. 1, died Wednesday (April 9, 2003) in Jones Memorial Hospital.  She was born January 17, 1947, in Wellsville, a daughter of Harley Morris and Helen (Kemp) Morris.
In 1977, in Wellsville, she married Richard Cumpston who predeceased her on August 4, 2001.  Linda graduated from Wellsville High School in 1965 and was a former member of the Christian Temple Church. She was a member of the VFW Post 2530 Auxiliary and a social member of American Legion Post 702, both of Wellsville. She enjoyed golfing, crocheting and her grandchildren.  Survivors include, a daughter. Karen (William) Kirsop of Perry, five grandchildren, a son, James A. Baker Jr., and a sister, Sharon (Clifford) Mattison of Alma, several cousins, nieces, nephews, aunts and one uncle.  Friends may call today from 7 p.m. to 9 p.m. at the J.W. Embser Sons Funeral Home, in Wellsville, where a funeral service will take place at 11 a.m. Friday with the Reverend Ralph Eastlack officiating. Burial will be in Woodlawn Cemetery.  Memorials may be made to the American Cancer Society. 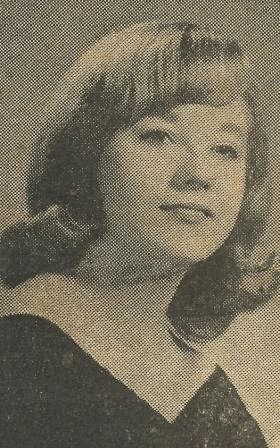 Lucinda (Cindy) Gorham, 66, Coudersport, PA, passed away November 12, 2014 at Cole Memorial Hospital with her loving daughter Wendy Nicka by her side. Born November 22, 1947 in Williamsport, PA she was the daughter of Fordyce and Nell Gorham. Cindy was employed for 25 years as a clerk for Fredrick’s True Value. She enjoyed gardening, cooking, reading and spending time with her grandchildren. Cindy is survived by her long time companion, Nortan Cole, daughter; Wendy Nicka and her grandchildren; Anderson, Aydan , Khloe Nicka and Kiyah Rajczak, and her sister, Rachel Gorham. Cindy’s Life Celebration will be held at a later date at the convenience of the family and memorials may be made to the local SPCA or the Coudersport Public Library, 502 Park Ave., Coudersport, PA 16915.

Connie J. Greenfield, 67, passed away unexpectedly Saturday (June 13, 2015) in Spotsylvania, Va., while vacationing. Mrs. Greenfield was born on July 12, 1947, in Wellsville, to Norman and Virginia Moore. She was a 1965 graduate of Wellsville Central School. On Oct. 7, 1967, in Scio, she married James D. Greenfield, who survives. Connie dedicated her life to serving her family. She was a loving homemaker and devoted wife. In recent years, she was the babysitter of choice for her many grandchildren, whom she loved dearly. In addition to her husband of 47 years, Connie is survived by three daughters, Lori (Jim) Rumfelt and Denise Greene, both of Andover, and Dawn (Frederick) Foster of Lake Mary, Fla.; one son, Brian (Agnes) Greenfield of Palm Harbor, Fla.; three brothers, James (Marcia) Moore of Andover, Norman (Autumn) Moore of Renfrew, Pa., and John Moore of Wellsville; one sister and brother-in-law, Kaye and Charles Saunders of Campbell; 16 grandchildren, MaKenzy Rumfelt, Bryce Rumfelt, Evan Rumfelt, Allison Rumfelt, Aaron Bassi, Andrew Bassi, Kira Bassi, Zachary Greenfield, Alexandra Greenfield, Tagan Greenfield, Breckyn Greenfield, Malaya Foster, Cody Greene, Hunter Greene, Noah Greene and Wryder Greene; and one great-grandson, Braylon Tuttle. In addition to her many family activities, she was an avid poker player where she enjoyed taking money from her brothers. She also liked visiting casinos and always made time for her favorite soap operas. There will be a time of visitation on Wednesday (today) from 6-8 p.m. and on Thursday from 10-11 a.m. at Baker-Swan Funeral Home in Andover. The funeral service will be held on Thursday at 11 a.m. at the funeral home immediately following the visitation with Rev. Calvin Densmore of the First Baptist Church of Andover officiating. Burial will follow in Hillside Cemetery.

Linda Satterlee Mocejunas, 65, was welcomed into heaven by her friends and family on December 27, 2012 after a long struggle with cancer. She was born April 28, 1947 in Wellsville, NY. Lin was open-hearted, generous, and dedicated to service. Lin took great pleasure in making gorgeous quilts, especially with her devoted friend Rene. Lin’s family was her delight; she was ever-present to her daughters and all five of her grandchildren, her “grand-blessings.” She leaves a legacy of faithfulness and bravery.  She is survived by her daughters Michelle (Tim) O’Connor and Jen (Jeff) Kondziela; grandsons Jeremiah, Noah, and Colin; granddaughters Karlie and Caroline, all of Rochester; brothers Bill of Hawaii and Phillip of Wellsville, niece Lynn Stillman (Shane) of Auburn and five nephews Christopher and Joshua Nash of Buffalo, Adam and Jason Satterlee of Wellsville and Mark Longo of Hawaii. She is predeceased by her parents Virginia Dean and William Satterlee and her sister Gayle Nash. She had an abundance of amazing friends many from St. John Fisher where she worked for 30 years.
A funeral mass is scheduled for Monday December 31st at 10 AM, at Spiritus Christi Church, 121 North Fitzhugh Street, Rochester NY. The family wants to express sincere thanks to Lin’s caregivers at Pluta Cancer Center. Donations in Lin’s name can be made to Pluta Cancer Center. 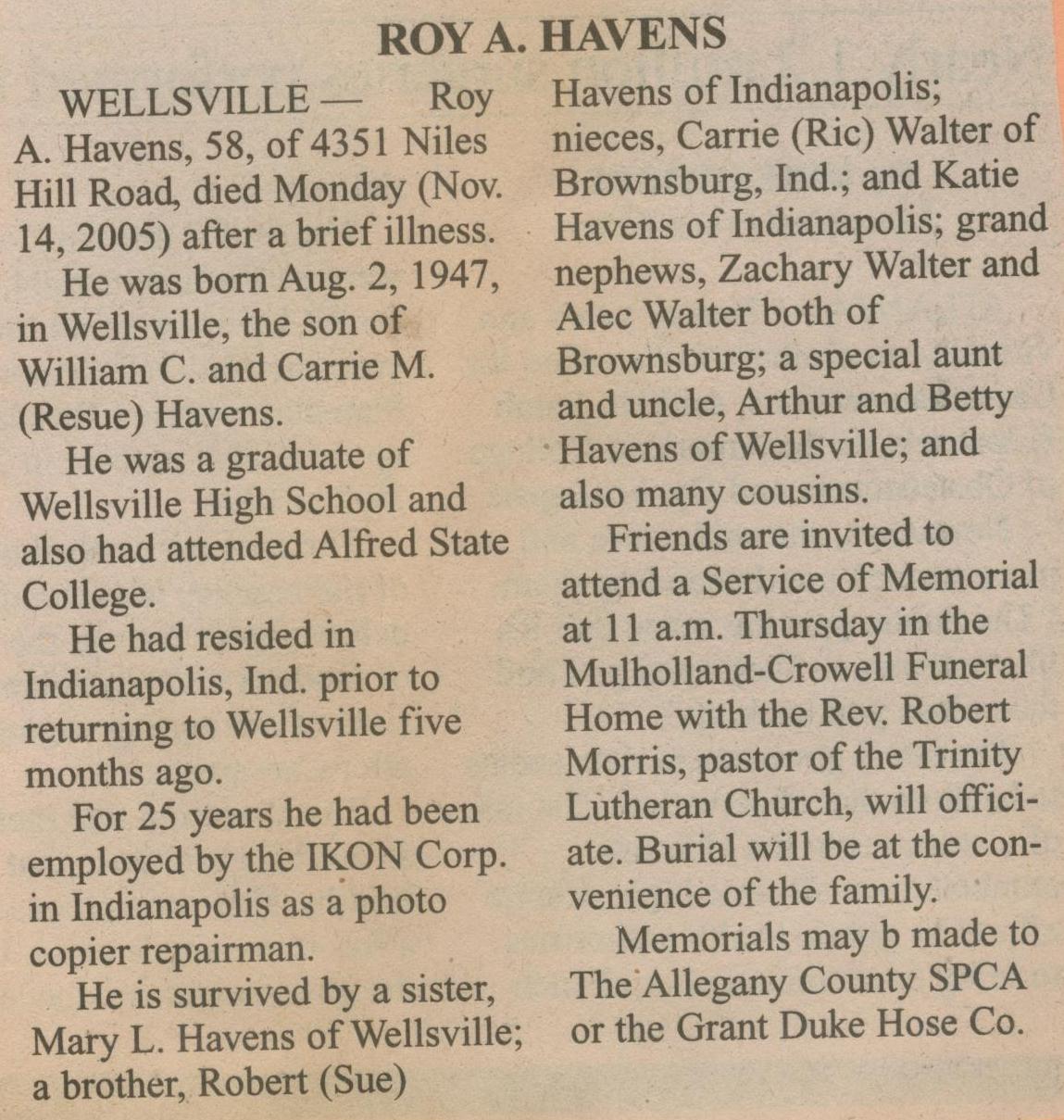 Peter Jack Plants passed away at the age of 68 on Dec. 18, 2015 after a brief illness. He was a courageous and quiet fighter. Peter, born July 28, 1947, was the loving son of the late William and Veronica McHale Plants. Peter is survived by his children, Tiffany Plants Hertel, Chad (Marissa) Plants, Sarah and Abigail Plants; his brother, William (Candace) Plants; and sisters, Suzanne (Jan) Fundalinski, and Elizabeth (Jeffrey) Jubenville; along with several nieces, nephews and grandchildren. Peter is predeceased by his sisters, Kathryn Plants, Colette Reardon, Drusilla Dimant, and infant Mary Plants. Upon his graduation from Wellsville High School, Peter attended Morrisville College. Peter joined the U.S. Navy in 1967 and served for four years. He then went to work at the Harrison Corp, Citicorp, most recently for HSBC until his illness this year. Peter was a parishioner at the Good Shepherd Church in Pendleton, N.Y. He was a very faithful and spiritual man and remained devoted to the Lord until his very last breath. When Peter wasn’t busy taking care of his horses, he was likely on the road with his daughter, Abigail, watching her barrel racing competitions. A celebration of Peter’s life will take place on Jan. 9, 2016 at the Good Shepherd Church in Pendleton at 11:30 a.m. In lieu of flowers, donations may be made to the Hospice of your choice or the Good Shepherd Church.