Laurie A. Cornelius, 50, passed away on Wednesday, December 11, 2019 at  Rochester General Hospital following a lingering illness. She was born May 29, 1969 in Wellsville, the daughter of the late Gerald C. and Judy A. (Lewis) Cornelius.  Laurie was raised in Wellsville, she was a 1987 graduate of Wellsville High School and attended Olean Business Institute. She was formerly employed as a receptionist at Jones Memorial Hospital. She has resided in Texas, Salamanca, and most recently in Rochester. She enjoyed making crafts, reading and watching TV.  She is survived by a son Brady, a brother, Bradley (Samantha) Cornelius of Wellsville, a nephew, Zachary Cornelius, two nieces, Danielle and Anna Cornelius, four aunts, and several cousins. She was predeceased in
addition to her parents by a brother, Michael E. Cornelius on May 31, 1988, and a niece, Chelsea Cornelius. Friends are invited to call on Tuesday, December 17, 2019 from 4:00 to 5:00 pm at the J. W. Embser Sons Funeral Home Inc., 34 W. State Street in Wellsville. Burial will be in Yorks Corners Cemetery. Please consider
memorial donations to the Hart Comfort House. 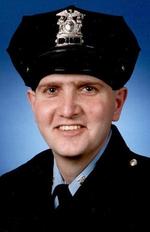 43, of 70 Cameron Street, passed away Sunday (Dec. 16, 2012) at the home of his friend Erik Potter in Scio, after a 20 year, hard fought battle with cancer. He was born June 4, 1969 in Hornell, N.Y., the son of Dale and Joyce (Perry) Eldridge. On Feb. 11, 1994, he married Renee D. (Slack) Walsh on the air at WJQZ-WLSV Radio by Mayor Sue Goetschius.
Chris was well known for his career at WJQZ-WLSV Radio Stations as a DJ and News Director. He was also a former dispatcher for the Allegany County 911 Center and was a Communication Specialist at the Wellsville Police Department. Chris loved his career in radio and working with his many friends at the Wellsville Police Department. His true love, in addition to his family, was Emergency Services. In 1981, at the age of 12, Chris became a junior member of the Allegany County Office of Emergency Services Rescue Squad. For over 30 years, Chris has been affiliated with the Wellsville Ambulance, Rescue, Fire Department, Allegany County 911 Center and the Wellsville Police Department, as the Emergency Manager for the Town and Village of Wellsville.
Over the years, Chris has received a number of honors and awards including, the New York State EMS Communications Specialist of the Year, The Wellsville Area Chamber of Commerce Community Service Award, The Allegany County Volunteer Fireman’s Association Fireman of the Year, not once but twice, the Wellsville Elks Lodge Citizen of the Year and the Wellsville Volunteer Ambulance Corps Chester Weaver Memorial Member of the Year Award. On Oct. 6, 2012, it was proclaimed Chris Eldridge Day in Wellsville and Allegany County.
Surviving, in addition to his wife and parents, is his Cocker Spaniel, “Rece” his little girl and faithful companion. He is also survived by his niece, Katie Joe (Shawn) Mills and their children, Blake and Macie Joe, a nephew, Danny Coleman, all of Wellsville; four brothers-in-law, Dan Coleman of Wellsville, Rick (Jackie) Slack of Warrenville, S.C., Ron Slack and Randy (Kristina) Slack of Belfast; as well as several aunts, uncles and cousins. He was predeceased by his sister, Kimberly Coleman; sister-in-law, Resa Slack; his aunt, Donna Geffers; his mother- and father-in-law, Robert and Susan Slack; and his grandparents.
Chris enjoyed NASCAR and was a Dale Earnhardt Jr. and a big Buffalo Sabres fan. Chris was proud to be a member of the Wellsville Volunteer Ambulance Corps for 30 years and to be a Rescue Chief for the past 18 years.
Friends are invited to call on Wednesday from 2-4 and 7-9 p.m. at the J. W. Embser Sons Funeral Home Inc. in Wellsville. The funeral will be Thursday (Dec. 20, 2012) at 11 a.m. in the First Congregational Church, 289 N. Main Street in Wellsville with Rev. Ralph Eastlack presiding. Burial will be in Woodlawn Cemetery.
The family suggests in lieu flowers, memorial donations be made to the Rescue Division of the Wellsville Volunteer Ambulance Corps, P.O. Box 206 Wellsville, NY 14895. To leave online condolences, please visit www.embserfuneralhome.com.