Held the high jump record in track at Wellsville for 37 years.

A true leader of men as he was selected team captain of the 1940 track team and baseball teams.

First Team All Livingston County All-Star in football his Junior and senior year.

Excelled in four sports of football, basketball, baseball, and track his junior and senior year.

After high school he was an outstanding basketball player for the old Air PreHeater Team that dominated the Wellsville Community League.

Inducted as a member of the Ithaca College Hall of Fame

Known for his toughness in football, basketball, and as a catcher in baseball

First Team All County in football and co-captain in 1941

Star athlete in four sports during his high school career 1942

All Conference selection and captain of his team

Leading scorer in football, batted over 400 in baseball, and won consistently in the 100 & 220 yard dash in track

Went on to be a starting running back at Alfred University

Started on the varsity for three years in three different sports

Worked with the Wellsville Midget Football Program for over 15 years

In high School he was awarded the very prestigious 20 Point Letter Award as well as The Man of the Year Award in 1945.

He played shortstop on his high school baseball teams where he was chosen to play in the County All Star Game, and he was recognized as a brilliant glove man.

After graduation he went on to have a wonderful career in softball. In 2000 he was selected as the best all around player in Irondequoit Senior Softball League.

A leader of men he served as commissioner of the Irondequoit Softball League for 1992-1997.

He was recognized as a three sport star in the sports of football, basketball, and track.

In football he will always be remembered as one of the best running backs to play at WHS during this era.

In the sport of track he seldom was beat in the events of broad jump and high jump winning three consecutive county championships in both events. 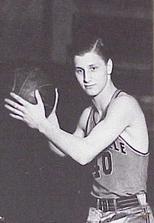 Earned his 20 point letter in his sophomore year

Set the high school record in track for the 100yard dash, his senior year 10.2 seconds.

This record stood for 31 years before broken by his son – Dean.

Served in the Military

Recognized by many that had the pleasure to see him play as the best athlete of his era.

Was a starter on four sports teams for thee years (football, basketball, baseball, and track).

In 1947 he was chosen by the School Faculty Council to be inducted into the Sportsmanship Brotherhood Club. A tremendous honor for an athlete at that time.

He was chosen for several Allegany County all star teams in the sports he played, and was a member of 880 yard relay team that broke the county record in 1946. This record had stood since 1934.

In the military he was the star running back on his football team while stationed in Japan. This team featured several pro players.

A great athlete that was admired by those that had the pleasure to call him a teammate.

Won several county and Spring Day Meets in track, and made Sectionals in both the pole vault and high jump

Started at halfback for the undefeated 1956 Alfred University football team, honored as the #1 Small College Team in the nation

He was an outstanding athlete in high school playing four different sports and excelling in them all.

He won a Section V championship in wrestling at the 175 pound weight class.

He was so good in baseball that he had several looks from such teams as Detroit, St. Louis, and Washington.

In town team baseball he once had 16 strike outs in a nine inning game.

He coached football at LeRoy and Portville.