Anthony V. “Tony” Mariotti, 43, of 2336 Meservey Hill died October 3, 2003 at home. He was born December 22, 1959 in Wellsville, the son of Siegfried Mariotti and Caroline Schramm.  Tony was a lifelong resident of Wellsville and graduated from Wellsville High School in 1979. He spent many years working at the Kwik-Fill in Wellsville. Tony was also a loving father and an avid outdoorsman who lived to hunt and fish.  Tony is survived by his mother; Caroline Mariotti of Wellsville: a daughter; Samantha Jo Mariotti of Scio: 3 brothers; Paul Mariotti of Wellsville, James Mariotti of Raleigh, NC , Joseph (Kera) Mariotti of Wellsville, and 2 sisters; Lisa (Tom) Lee of Hemlock, NY and Beth (Dan) Cooke of Honeoye Falls, NY. He is also survived by and uncle, several cousins, 4 nieces, and a longtime friend; Tracy Saxton.  He was predeceased by his father Siegfried in 1989.  Friends are invited to call on Monday October 6th from 2:00-4:00 pm and 7:00-9:00 pm at the J.W. Embser Sons Funeral Home Inc. in Wellsville. The funeral service will be at 11:00 am on Tuesday at the funeral home with Rev. Mason Sorensen presiding, and burial will be in Genesee, PA. Memorials may be made to the American Cancer Society.

Gail M. Willson, 54, of 964 State Route 19 South died on Saturday, February 27, 2016 at home. She was born August 6, 1961 in Wellsville, the daughter of Milford and Eleanor (Dodge) Cline. On June 14, 1980 in Wellsville she married Jeffrey J. Willson who survives. Gail was a 1979 graduate of Wellsville High School and attended Jamestown Community College. She was formerly employed at Harris Supply, Howbill Auto Parts, Alfred State College and for many years at Alstom Air Preheater Company. She also was a substitute teacher at the Immaculate Conception, Whitesville Central and Wellsville Central School. She was an active member of the Immaculate Conception Church and volunteered at ICS and the Hart Comfort House. She loved the outdoors, archery hunting, knitting, crocheting and taking pictures of her family.  Gail was a loving wife, grandmother, and devoted mother. She is survived in addition to her husband by her sons, Jeffrey (Jessica) Willson Jr. of Tioga, PA, Patrick (Ashley) Willson of Clifton Park and Stephen (Breanna) Willson of Wellsville, and her daughter, Kathryn (Josh) Sherwood of  Palmer, AK, seven grandchildren, Abigail, Brooke, Cameron, Lillian, Patrick, Marissa and Emma, her mother, Eleanor (Stewart) Harrison of Leesburg, FL, her father Milford (Marie) Cline of Wellsville, and one brother, Gary Cline of Wellsville, a large extended family and many friends.  Friends are invited to call on Wednesday, (March 2, 2016) from 2-4 & 7-9 pm at the J. W. Embser Sons Funeral Home Inc. in Wellsville. The Rosary will be recited on Wednesday at 4:00 pm. A Mass of Christian Burial will be celebrated on Thursday, (March 3, 2016) at 11:00 am at the Immaculate Conception Church in Wellsville. Burial will be in Sacred Heart Cemetery. The family suggests memorial donations be made to the Hart Comfort House or the Immaculate Conception School.

Charles John “Chucky” Waters, 50, of 4192 Bolivar Road died on Tuesday, December 29, 2009 at the Wellsville Manor Care Center following long battle with cancer. He was born August 3, 1959 in Buffalo the son of Robert E. and Patricia R. (Lincoln) Waters. Chucky played football for Wellsville and was a 1979 graduate of Wellsville High School. He was a former employee of Bell Equipment in Wellsville and was a member of the Morrison Hayes Post 702; Sons of the American Legion.
He is survived by his mother, Patricia R. Goupil of Duke Center, PA, a daughter, Courtney Ann Waters of Wellsville, two brothers, Robert W. Waters of Wellsville and David M. Waters of Belmont, two sisters, Brenda J. Waters of Niagara Falls, NY and Patricia M. (Michael) Beckwith of Wellsville and several aunts, uncles, nieces, nephews and cousins. His unlimited kindness will be missed by his family and many friends.
He was predeceased by his father and a brother, James A. Morley.
Friends are invited to call on Saturday from 2:00 to 4:00 pm at the J. W. Embser Sons Funeral Home Inc. in Wellsville. A memorial service will follow visitation at 4:00 pm Saturday in the funeral home with Pastor Dick Helms presiding. Burial will be in Woodlawn Cemetery in Wellsville. Memorial donations are suggested to the Activities Department of the Wellsville Manor Care Center or to the Morrison Hayes Post 702 American Legion in Wellsville.

Jay D. Stevens, 52, of 411 Center Street died on Thursday, September 27, 2012 shortly after arrival at Charles Cole Memorial Hospital in Coudersport, PA. He was born September 11, 1960 in Wellsville the son of James and Nancy (McCracken) Stevens.

Jay was a 1979 graduate of Wellsville High School and had resided in Wellsville and Bolivar before moving to Ulysses. He was formerly employed at a variety of construction companies in the area and later for Air-Preheater Company in Wellsville for many years. He then became an over the road truck driver for Jaylor Trucking of Belfast; a job the he enjoyed very much. He was an outdoorsman who loved to fish and hunt. He also enjoyed gardening and teaching the local grandchildren to cook.

Friends are invited to call on Monday, October 1, 2012 from 7:00 to 9:00 pm and Tuesday from 11:00 am to 12:00 noon at the J. W. Embser Sons Funeral Home Inc. in Wellsville. A memorial service will follow visitation at 12:00 noon on Tuesday in the funeral home with Rev. Ralph Eastlack presiding. Burial will be in Woodlawn Cemetery. Memorial donations may be made to the American Heart Association or the American Diabetes Association.

Kirk Howard Roeske, 52, of Hobbs, NM, passed away from a lengthy illness on Saturday, March 2, 2013 at the home he shared with his life partner Sami Harrison of Hobbs, NM. He was born January 17, 1961 in Ontario, California, a son of the late Kenneth M. and Gladys K. (Wilson) Roeske of Washington, NC, whom he lovingly referred to as “Chuck” and “Maude.”

Kirk was a 1979 graduate of Wellsville High School, and earned both his bachelor’s and master’s degree from East Carolina University, Greenville, NC and was a registered dietician and licensed nutritionist employed with the Lea Regional Medical Center in Hobbs. The scope of his healthcare career included hospitals and skilled nursing facilities across the United States. He was proud of his chosen profession and possessed a love for the elderly.
Kirk was a loving and caring father and is survived by his 4 children: Misty Shearin of Chesapeake, VA, Jesse, Jillian and Jordan Roeske of Kingsley, PA and one grandson, Caleb Shearin. His surviving siblings include: Pamela K. Deese of Chocowinity, NC, Kenneth M. Roeske of Port Carling, Ontario, Canada, and Kristopher E. Roeske of Bakersville, NC.
He was passionate about his family, his motorcycle, camping, spending time with friends and storytelling of his adventures. He had particular interest in taking the path less traveled and will forever be remembered for his warm smile, hearty laugh and generosity he shared among family, friends, and strangers alike.
Family and friends are invited to attend a remembrance service celebrating Kirk to be held at the Island Park in Wellsville, NY on June 22, 2013 starting at 2 pm and ending at 6 pm. In lieu of flowers donations can be made to benefit families and children living with autism through: The Brotherhood #74, c/o Charles Rich, Post Office Box 6057, Hobbs, NM 88241. 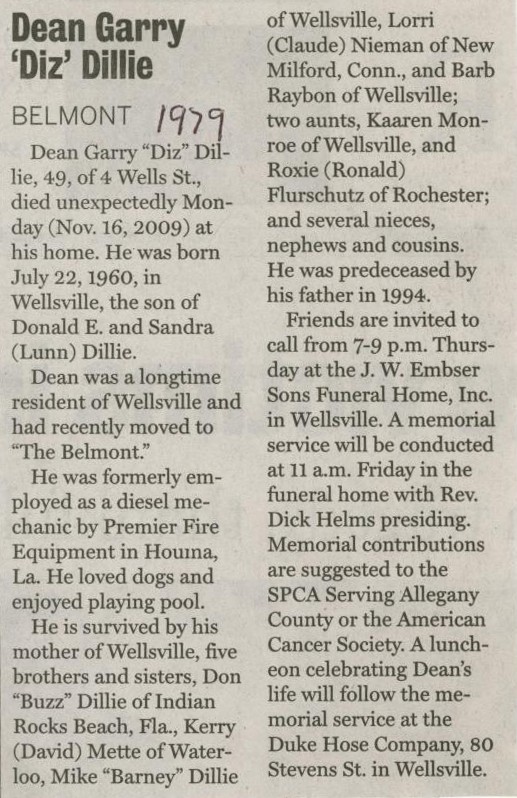 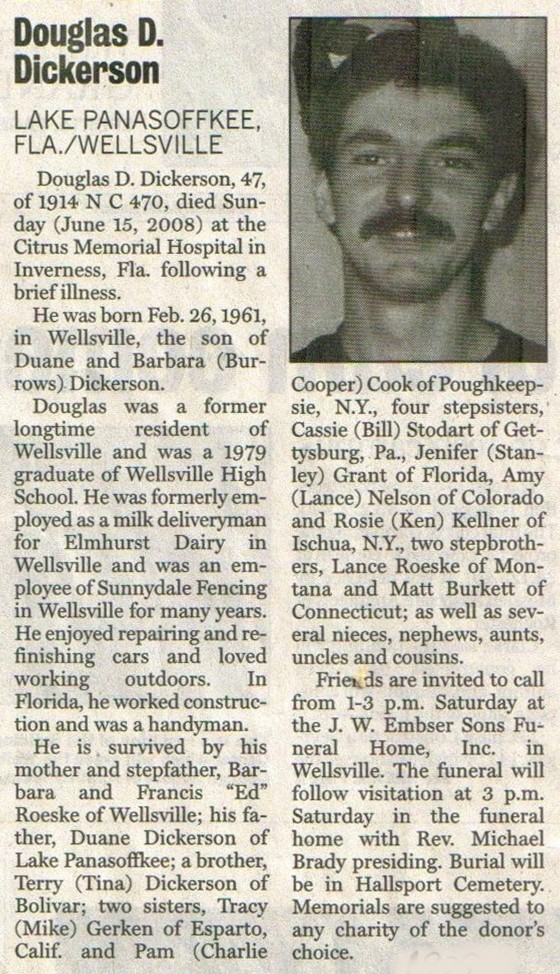