David A. Marsh, 63, of Rauber Street passed away on June 23, 2021 at Jones Memorial Hospital surrounded by family. He was born in Wellsville on February 18, 1958 the son of the late Donald and Ruth (Buckout) Marsh. On August 31, 1999 at home in Wellsville he married his wife Karen Yetman who survives.  Dave was a life long resident of Wellsville. He was a 1976 graduate of Wellsville High School and a graduate from Alfred State Vocational School. He continued his education by earning an Associate’s degree in Engineering from Alfred State College. Upon graduating, he began his career at Air-Preheater as a draftsman. He later moved on to Dresser-Rand, from where he retired after thirty-five years of service as a Machinist & Assembler. He was a member of the International Association of Machinists Moore Lodge #1580 of Wellsville.   Outside of work, Dave enjoyed being outdoors, including hunting and fishing. Most of all he loved being at home, working in his vegetable garden, and building his own oasis. He also continued to pursue his life-long passion of restoring classic automobiles including his 1965 Impala SS convertible. He especially loved his family and being with them, even while ill he enjoyed family gatherings. Dave was also an avid Yankees and NASCAR fan.  In addition to his wife of twenty-one years Karen, he is survived by: six children, Joshua (Melanie) Marsh of Monroeville, PA, Jackie (Ed) Shea of Wellsville, Jeremy (Abby) Marsh of Belmont, Sarah (Chris) Beeghley of North Collins, Rachel (Brooke Gustin) Yetman of Wellsville, and Alanna (Brett McPeek) Yetman of Port Orange, FL; fourteen grandchildren; a brother Dan (Annette) Marsh of Scio; a niece; and several cousins. He was predeceased by his parents.   Friends are invited to call on Tuesday, June 29, 2021 from 5 – 7 pm and Wednesday, June 30 from 12 noon to 1pm at the J.W. Embser Sons Funeral Home in Wellsville (34 W. State St.). The funeral will follow on Wednesday at 1pm with burial in Woodlawn Cemetery. Please consider memorial donations to The Hart Comfort House. 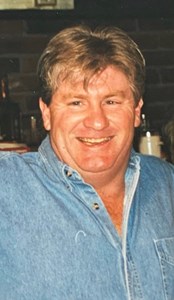 Daniel J. Kemp, 62, of Albany, passed away suddenly on December 17, 2020. Dan was born on May 17, 1958 in Hornell, NY and was raised in Wellsville, NY. He graduated from Wellsville High School, Corning Community College, and Buffalo State, earning a bachelor’s degree in criminal justice. He served as a police officer in Wellsville, a corrections officer at Danbury CT Federal Correctional Institution, and as a U.S. Marshall. After Dan left law enforcement, he co-founded the real estate firm of Kemp and Gallagher in Albany, and later had successful careers in sales and property management. “Danny” will be fondly remembered as a man that loved to laugh, with a personality as big as his smile. It was absolute and infectious. Dan was a kind and gentle person, who loved to tell funny stories – of which, he had many! Whether he was reflecting on time spent with family and friends (particularly in Wellsville and on Loon Lake) or making new memories in the moment, Dan held a distinctly special way of connecting with people. More than anything else, he spent his time talking – to anyone who would listen – about his two sons, Tim & Bill, whom he loved fiercely. Nothing made him happier than spending time with his boys, especially during the holidays. He most notably spent that time discussing his (alleged) scratch handicap, his most recent take on the Buffalo Bills and without fail, how “unbelievably proud” he was of each of them. Dan was predeceased by his father, Kenneth D. “Bud” Kemp; stepfather, John Robarts; brother-in-law, Damon Lawrence; sister-in-law, Karen Kemp. He is survived by his children, Timothy Kemp; William (Rachel) Kemp. He is also survived by his mother, Martha Robarts. Dan is survived by his siblings, Ken Kemp; Liz Lawrence; Cathy (Chris) Weinman. He also leaves behind the many members of the “Goober Club,” including nieces Sadie Dexter, Abby Lawrence, and Jehna Kemp; nephews Brandon Lawrence and Matt Kemp. Dan will be laid to rest at Woodlawn Cemetery in Wellsville, NY in the spring of 2021, which will be arranged by Embser’s Funeral Home. In lieu of flowers or donations, his family asks those reading to reach out to your family, friends, or even a lost connection, simply to say hello. During a time where so many are searching for hope or joy, a phone call or letter may be exactly what they need. Cheers, Danny. You will be forever in our hearts. 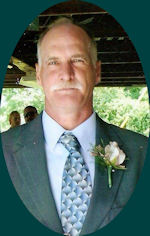 John W. Pratt Jr., 55, of 5098 Niles Hill Road died on Saturday, August 25, 2012 at home, surrounded by his family. He was born January 25, 1957 in Chandler, AZ at Williams AFB the son of John W. and Joan (Cameron) Pratt Sr. On September 8, 2007 in Andover he married Jan Newland who survives.
John was a 1976 graduate of Wellsville High School. He was formerly employed at Loblaws in Wellsville and Pratt Oil Company Fords Brook Road Wellsville, NY. He began his career with Harris Supply Company of Wellsville in 1986 and continued with I.D. Booth Company until his recent illness. He was a member of the Wellsville Elks Lodge # 1495.
John had an amazing love of family and life. He also had an enthusiastic love for all things RV; which he shared with everyone and anyone who would listen. He was at his finest in his captain’s chair, driving the big rig on a trip with his wife and family, wherever the road took them. An avid sports fan, John loved to watch his Yankees and Sabres, and played slow-pitch softball himself for years. He later loved being able to coach both Cinderella softball for 7-11 year old girls, and then slow-pitch softball; where he coached the Better Days team for several years, winning numerous championships. His love of sports came from his love of life; which he brought to everyone he came into contact with. Forever the loving, compassionate man, he brought joy to everyone who was lucky enough to know him and be a part of his life.
Surviving in addition to his wife, is his mother, Joan (Pratt) Giddings of Franklin, TN, three children, Jennifer (Tim) Doyle and Renee (Ryan) Potter both of Wellsville and 2nd LT. Ryan Pratt, U. S. Army Reserves of Franklin, TN, three step-children, Patrick (Lynda) Winans of Cuba, Christine Winans of Olean and Staff Sergeant Daniel Colf USAF of Aviano, Italy, five grandsons (Ty Potter, Ethan Potter, Carson Potter, Mark Paige and Jensen Winans), one brother, Jerry (Adelaide) Pratt of Franklin, TN, two sisters, Sharon (Mike) Johnson of Fort Walton, FL and Brenda (Bob) Sobeck of Wellsville , as well as several nieces & nephews and his ex-wife Diana Green Pratt. He was predeceased by his father John W. Pratt Sr.
Friends are invited to call on Tuesday, August 28, 2012 from 2:00 to 4:00 and 7:00 to 9:00 pm at the J. W. Embser Sons Funeral Home Inc. in Wellsville. The funeral will be Wednesday at 11:00 am at the First Congregational Church, 289 N. Main Street in Wellsville with Rev. Ralph Eastlack presiding. Memorial donations can be made to Homecare & Hospice as well as the American Cancer Society.

Jeffrey A. “Pony” Petersen, age 56, of 152 Pine Street passed away at home on Sunday June 21, 2015. He was born on August 23, 1958 in Hornell to Roger and Myrna Clark Petersen.
Jeff was a long time resident of Wellsville who graduated from Wellsville High School in 1976 and from Corning Community College. He had worked for St. Bonaventure University in Olean in the Bakery Department. Jeff enjoyed the out of doors, golfing, hunting with a gun or a bow, fishing and conservation issues. He enjoyed playing all organized sports from his youth until playing baseball at Corning Community College. In his later years he enjoyed watching sports on television, especially NASCAR and the New York Yankees. Jeff was involved with fantasy sports and communicating with his friends via the internet.
Jeff is survived by his mother and step father, Myrna and Dominick Petrelli of Wellsville; 2 brothers, Roger (Jill) Petersen of Wellsville and Andy Petrelli of Wellsville; As well as Jill’s 3 sons, Aaron, Dustin and Chris Hess.
Jeff was predeceased by his father Roger Petersen and all of his grandparents.
There will be no prior visitation and a memorial service will held at the convenience of the family. Memorials in Jeff’s name may be made to the Wellsville Volunteer Ambulance Corps. 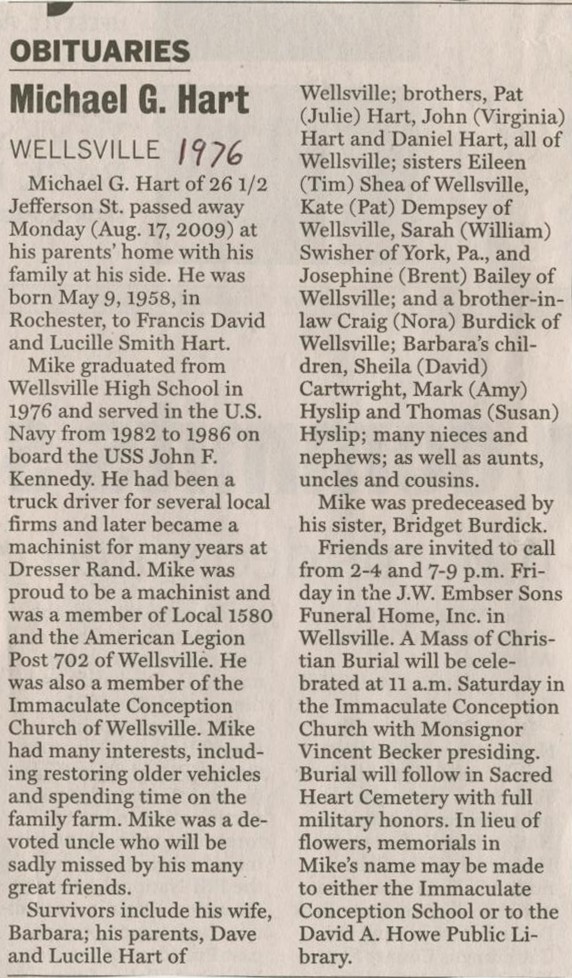