Gary Steven Kephart, 64, passed away on Sunday (Jan. 14, 2018) in Knoxville, Tenn.  He will be remembered as a loving and caring husband, father and grandfather as well as a friend to all of those he met.  Gary is survived by his loving wife, Jody Kephart; daughter, Julie Kephart and her husband, Alan; son, Brian Kephart and his wife Becca; four grandchildren, a sister, Brenda Baird and her husband Larry; a brother, Craig Kephart and his wife, Kathy; and a brother, Eric Kephart and his wife Melissa. The family will receive friends on Friday January 19, 2018 from 5 – 7 p.m. at West Park Baptist Church, 8833 Middlebrook Pike, Knoxville, TN 37923 with a Celebration of Gary’s life to be held at 7 p.m. at the church.

Lisa C. Sweet, 63, of 45 South Brooklyn Avenue passed away on Saturday, September 30, 2017 at Highland Hospital in Rochester. She was born November 18, 1953 in North Hornell, the daughter of the late Calvin B. and Louise (Dohring) Cook.   Lisa was a 1971 graduate of Wellsville High School and received an Associate Degree in Business from Olean Business Institute. She was the Administrative Assistant to the CEO and CFO at Jones Memorial Hospital; where she had been employed for the past 36 years. She was a former member of the McEwen Hose Company # 4 in Wellsville and was a life member of the Jones Memorial Hospital Auxiliary.  She is survived by one daughter, Beth (Greg) Day of Wellsville, two grandchildren, Kayla and Dylon Day, two sisters, Christel (James) Burm of Newark and Laurie Dawson and her companion James Clark of Winchester, VA, a brother-in-law, Thomas Barnett of Rushford, mother-in-law, Glady Sweet of Wellsville, sister-in-law, Kathy (Roger) Moyer of Wellsville, nine nieces and nephews, Danielle, PJ, Brendan, Molly, Kyle, Katie, Darren, Hillary and Hayley, six great nieces and nephews, Cheyenne, David, Brynlee, Liam, Blake and Jackson, and a very special friend, Roger Neely of Wellsville. She was predeceased in addition to her parents, by a sister, Corky Barnett and a nephew, Eric Barnett.  Friends are invited to call on Friday, October 6, 2017 from 5:00 to 7:00 pm and Saturday, October 7th from 10:00 am to 12 noon at the J. W. Embser Sons Funeral Home Inc. in Wellsville. The funeral will follow the visitation on Saturday at noon in the funeral home with Rev. David Potts presiding. Burial will be in Alfred Rural Cemetery at a later date.  Please consider memorial donation to the American Kidney Fund or the American Cancer Society.

Amy L. (Wilcox) Dickerson, 62, of East Dyke Street passed away on Monday, January 18, 2016 at Highland Park Healthcare Center in Wellsville, following a battle with cancer. She was born September 30, 1953 in Wellsville, the daughter of Richard M. and Jean (Thornton) Wilcox.    Amy was a 1971 graduate of Wellsville High School and attended Olean Business Institute. She was employed by National Fuel Gas. She was an avid reader and spent many Thanksgivings delivering dinners to those in need.     She is survived by her mother, Jean Wilcox of Wellsville and her brother, Scott Wilcox of Meadville, PA. She was predeceased by her father, Richard on November 23, 1991.     Friends are invited to call on Friday, January 22nd from 6:00 to 8:00 pm at the J. W. Embser Sons Funeral Home Inc. in Wellsville. Burial will be in Fairlawn Cemetery in Scio at a later date. The family suggests memorial donations be made to the David A. Howe Public Library, 155 N. Main Street, Wellsville, NY 14895.

Richard A. Graves III, 58, of 3455 Jack Bridge Road died unexpectedly on Saturday, February 26, 2011 shortly after arrival at Waccamaw Community Hospital in Murrells Inlet, SC. He was born February 5, 1953 in Wellsville the son of the late Richard and Elaine (Bennett) Graves. On August 29, 1998 in Scio he married Roxanne M. Tierney who survives.  Dick was a lifelong resident of Wellsville and a 1971 graduate of Wellsville High School. He was formerly employed at Dresser-Rand Corporation in Wellsville and Olean. He began his 25 year career at Wellsville Central School as assistant Superintendent of Buildings and Grounds and was the Superintendent of Buildings and Grounds at the time of his death. He was a charter member and past president of Trout Unlimited where he was instrumental in the construction of the Genesee River handicapped access platform at Island Park in Wellsville. He was a former Wellsville Little League coach, a former member of the Wellsville rod and Gun Club and enjoyed hunting and fishing.  Surviving in addition to his wife, is one daughter, Jennifer (Bobby) Budinger and one son, Jesse (Magin) Graves both of Wellsville, three grandchildren, Emily and Annabelle Budinger and Riley Graves, two step grandchildren, Catherine Budinger and Autumn Bledsoe, three sisters, Dixie (Phil) Hyer of Wellsville, Karen (Jeff) Briggs of Andover and Beth (Kris) Carlin of Scio and two brothers, Dan Graves of Vaccaville, CA and Dean (Sondra) Graves of Mount Savage, MD, his former wife, Patty (Gary) Cook of Wellsville and several nieces & nephews.  Friends are invited to call on Wednesday from 2:00 to 4:00 and 7:00 to 9:00 pm at the J. W. Embser Sons Funeral Home Inc. in Wellsville. The funeral will be Thursday, March 3, 2011 at 11:00 am in the First Congregational Church, 289 N. Main Street in Wellsville with Rev. Ralph Eastlack presiding. Burial will be in Stannards Cemetery. Memorial donations are suggested to the SPCA Serving Allegany County or to Trout Unlimited. 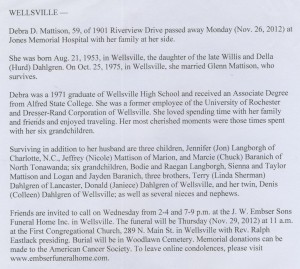 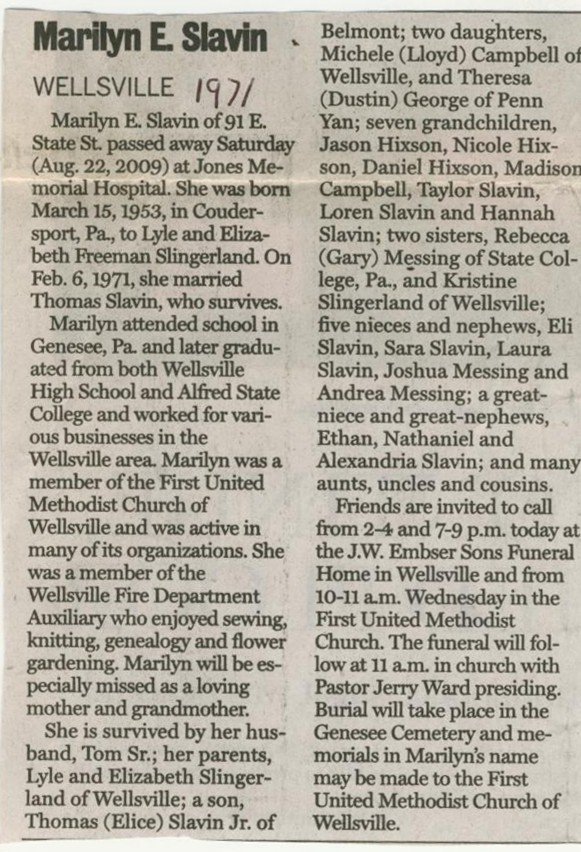 Edward John Peter Corcoran Jr. of North Franklin Street passed away Sunday (May 31, 2009) at Jones Memorial Hospital. He was born Sept. 19, 1953, in Wellsville, to Edward J. and Roberta Bartlett Corcoran. On Aug. 28, 2004, in Belmont, he married Kellee Osgood, who survives.  Ed graduated from Wellsville High School and was a veteran of the U.S. Navy, serving on the USS Mississinewa. He enjoyed working with his hands and was a machinist for RMT in Wellsville for 10 years. Prior to RMT, he had worked for the former Butler Larkin in Wellsville and also in construction. He was a longtime member of the Coven Motorcycle Club and the NRA. He will be remembered as a loyal friend, an understanding father and a loving husband.  Surviving besides his wife were his mother, Roberta Corcoran of Wellsville; a daughter, Missy ”Lorie” (Andrew) Allbright of Warsaw; two grandchildren, Isis and Ashor; a brother, James Corcoran of Wellsville; two sisters, Roberta (Joe) Andrasic of Fredonia and Kathleen Corcoran of Everett, Wash.; and several nieces and nephews.  He was predeceased by his father and a sister Teresa Corcoran.  Friends are invited to call from 2-4 p.m. Thursday in the J.W. Embser Sons Funeral Home in Wellsville. A funeral service, with military honors, will follow calling hours at 4 p.m. in the funeral home with Deacon Frank Pasquale presiding. Memorials in Ed’s name may be given to the charity of the donor’s choice.