Ruth V. Arnold, 87, of Hackettstown died Feb 12 are Care Center of Phillipsburg after a long illness. Born October 14, 1911 in Wellsville, New York, she was a daughter of the late John Watson. She resided in Wellsville, NY,, Wood-Ridge for most of her life and moved to Hackettstown in 1991. She retired in 1 976 after 21 years as a school teacher for the Linwood Ave School in Emerson, having taught K-3rd grade as well as taught for 6 years in Moonachie. She was a graduate of Geneseo State Teachers College in New York and William Paterson College in Wayne. Her husband William W., died Oct. 21, 1989 and a daughter, Julia Boschen of Pheonix AZ died in 1990. She is survived by a son, William J. of Tuckerton; a daughter, Joan Penna of Hackettstown; eleven grandchildren. Private services were held at Scala Memorial Home in Hackettstown. Interment was at George Washington Memorial Park in Paramus.

Virginia C. Fleischman, formerly of 40 West State Street, passed away on Saturday March 12, 2005 in the Wellsville Manor Care Center. She was born March 23, 1912 in Wellsville the daughter of Robert and Bertha (Arnold) Callaghan. On October 9, 1940 in Wellsville, she  married Edward G. Fleischman, who predeceased her February 22, 1989. Virginia was a former resident of Belmont, a 1930 graduate of Wellsville High School, and in 1938 graduated Magnum Cum Laud with a Bachelors degree from Seton Hill University in Greensburg, PA. She was employed by New York Telephone, David A. Howe Library in Wellsville, Herrick Memorial Alfred University Library, and the Belmont Free Library. She was a member of the Immaculate Conception Church in Wellsville, and the Altar and Rosary Society. She was also a former member of AAUW. Virginia is survived by 2 daughters: Ann (Richard) DeRue of Penfield, Lynn (James) Graffrath of Andover, 2 sons: Edward D. (Michele) Fleischman of Windsor, CO, James (Barbara) Fleischman of Belmont, 12 grandchildren, 15 great grandchildren, several nieces and nephews and a cousin: Robert Nitsche of Hendersonville, TN. In addition to her husband Edward, she was predeceased by 2 sisters: Roberta Callaghan and Jean Williams. Friends are invited to call on Monday from 7:00 to 9:00 pm and Tuesday, March 15 from 9:30 to 10:30 am at the J.W. Embser Sons Funeral Home in Wellsville. A prayer service will follow at 10:30 and a Mass of Christian Burial will be celebrated at 11 am in the Immaculate Conception Church in Wellsville.  Buria will be in Sacred Heart Cemetery, Wellsville. In lieu of flowers, memorials may be made to the David A. Howe library or the Immaculate Conception School in Wellsville. 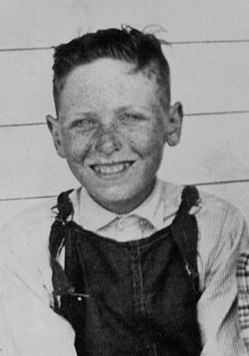 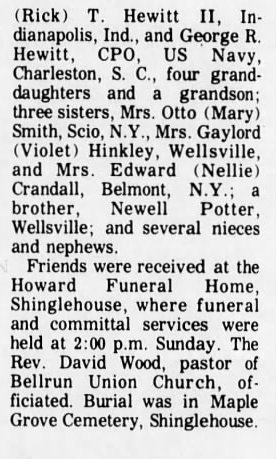 She was the only child born to parents Otto S. Dornow and Alma Caroline Weinhauer. She married Carroll Orville Wellington.

Dorotha M. Davis, 101, and a longtime resident of Stannards, passed away Monday (March 11, 2013) in the Highland Healthcare Center in Wellsville following a long illness.  Born Feb. 10, 1912, in Wellsville, she was a daughter of Frank A. and Myrtle Dickinson Foster. On Aug. 14, 1943, she married Harold L. Davis, who predeceased her on Oct. 23, 1960.  She was a longtime member of the Stannards United Methodist Church. She was a graduate of the Wellsville High School and Alfred Teachers’ Training School.  She taught for three years in the Stannards School District until her marriage, and was employed at the Sinclair Refinery in Wellsville. Until her retirement, she had been a case worker with the Allegany County Department of Social Services in Belmont.  She is survived by a sister, Marion Barney, of Hallsport; a step-son, Norman L. Davis, of Webster; three step-grandchildren; and several nieces, nephews and cousins. Burial will be in Stannards Cemetery in the town of Willing.  Memorials may be made to the Stannards United Methodist Church or to a charity of the donor’s choice.  Published in The Olean Times Herald on March 12, 2013