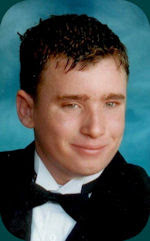 Jonathan Andrew Dahlgren, 26, formerly of 358 East Dyke Street died on Wednesday, October 5, 2011 in Verona from injuries sustained in a motor vehicle/pedestrian accident. He was born January 29, 1985 in Hornell the son of Denis and Colleen (Searles) Dahlgren.   Jon was a 2003 graduate of Wellsville High School and received a Bachelor’s Degree from St. Bonaventure University. He was currently employed by Maine Source, Inc. of North Syracuse. He had recently moved to North Syracuse to reside with his grandmother.  Many will remember Jon as an avid sports fan, forever loyal to the Buffalo Bills. He played volleyball and tennis while in high school and enjoyed several wonderful vacations with his family on the water in Northern New York.  Surviving in addition to his parents is a brother, Christopher Dahlgren of Syracuse, a sister, Erin Dahlgren of Wellsville, his maternal grandmother, Dorothy (Record) Searles of North Syracuse, four aunts, Colette (Tony) Leonard of Bridgeport, Ann Searles on Minoa, Kathy Searles of Mattydale and Debra (Glenn) Mattison of Wellsville, two uncles, Donald (Janice) Dahlgren and Terry (Linda Sherman) Dahlgren both of Wellsville, as well several cousins, other relatives and special friends.  Friends are invited to call on Sunday, October 9, 2011 from 2:00 to 4:00 and 7:00 to 9:00 pm at the J. W. Embser Sons Funeral Home Inc. in Wellsville. The funeral will be Monday at 11:00 am at the First Congregational Church, 289 North Main Street in Wellsville with Rev. Ralph Eastlack presiding. Burial will be in Woodlawn Cemetery. Memorial donations may be made to the Allegany County United Way.