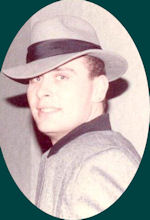 Clarence G. Brownell of Niles Hill died unexpectedly on Saturday, September 29, 2012, at the Corning Hospital. He was born on January 8, 1966 in Wellsville to Elmer A. and Alice P. Armstrong Brownell Jr.
Clarence graduated from Wellsville High School in 1984. While in High School Clarence enjoyed participating in the musicals and played the lead in three of them. After high school he enlisted in the US Army serving in Germany on the border patrol. Clarence was a jack of all trades but mainly worked in building construction and was last employed by General Roofing. Clarence was kind hearted and was the life of the party who liked to sing karaoke. He loved spending time with family and friends, outdoor activities, camping and having bon fires.
Survivors include: a sister, Jeanna Brownell of Wellsville; 3 brothers, Daniel (Linda) Brownell, Darrold (Doria) Brownell and Elmer Brownell all of Wellsville; five nieces and one nephew; aunts, uncles and cousins.
He was predeceased by: His grandparents, parents and a baby sister.
Friends are invited to call on Friday, October 5, from 12 noon to 2 pm at the J. W. Embser Sons Funeral Home in Wellsville at which time a funeral service will be held. Burial will be in the Yorks Corners Cemetery and memorials may be made to the American Heart Association.