Judy Mae Lehman age 63, of Ashland, passed away Friday, January 1, 2021 at her residence. She was born September 6, 1957 in Wellsville, New York, the daughter of Lester and Opal (Stratton) Witter. Judy was a 1977 graduate of Wellsville High School. She had been a resident of Ashland since 2014. Judy was a Homemaker. Judy was a member of the Come Alive Community Church. She loved making crafts and was very artistic. She was known for her amazing personality and sense of humor, she showed unconditional love to everyone she knew, she always treated her children’s friends as her own children. Her famous saying was “I’m raising cane”.  On March 11, 1978 Judy married Leo “John” Lehman who survives. Also surviving are her son, Neal Lehman of Dennison, Ohio; her daughter, Naomi (Josh) Hlovac of Ashland; her mother, Opal Wright of Cove City, NC.; her stepmother, Nancy Witter of Wellsville, NY.; her grandchildren, Dalton Hlovac, Onyx Mendenhall, Cadence Mendenhall; her brothers, Earl (Joann) Witter, David Witter, Tim Witter, Mike (Penny) Witter; sister, Donna (Ray) Lawrence; sister in law, Joy Witter; along with her special dog, Precious Baby.  Judy was preceded in death by her father, Lester Witter; an infant brother; brother, Dan Witter; and sister in-law, Donna Witter.  There will be a private funeral service for family and close friends at Heyl Funeral Home with Pastor Andrew Foster officiating. Burial will follow at Ashland Cemetery. Memorial contributions may be made in Judy’s memory to Heyl Funeral Home to help defray costs. Judy will be dearly missed by the many lives she had touched.

Timothy R. Walsh, 62, died on Monday, December 21, 2020 with family by his side. He was a Wellsville native born on September 22, 1958; the son to Jane and Robert Walsh who have predeceased him.  Tim was devoted to his career in law enforcement for 42 years, starting out as a dispatcher with the Wellsville PD and then becoming a patrolman in Alfred. He transferred back to the Wellsville PD to move up the ranks, served on the Southern Tier Drug Task Force and retired as the Chief of Police for the Village of Wellsville and as the Chief of Police for the Western New York and Pennsylvania Railroad.  He attended Immaculate Conception School and was a graduate of Wellsville High School, Class of 1977. He was a proud member of the infamous 1976 Varsity Football “Goose Egg” Team where he played the position of bench-warmer. His high school career was also topped off with the lead role in the Senior Play “The Man Who Came to Dinner”.  Tim volunteered for many organizations: he was a member of the Emerald Hook & Ladder Company, receiving the Allegany County Fireman of the Year for Heroism award twice; Immaculate Conception Church lector and funeral planner; member and PER of the Elks Lodge #1495; Ancient Order of Hibernians charter member; Meals on Wheels delivery and Honor Flight Rochester.  He enjoyed all things railroad, traveling, Manhattans, cooking and most importantly being with family and friends in any capacity.  He is survived by his wife Margaret, sons Robert, Michael, and Bryan; brother Shaun (Elaine), nephews Patrick and Kevin; sister Mary Kate Cole (Jeremy), nieces Elizabeth, Molly, and Sarah; father-in-law James Hart and Mother-in-Law Mary Hart; Brothers-in-Law Timothy Hart (Amy), Brian Hart (Kimberly), nephews James and Brendan; Sisters-in-Law Suellen Hart and Judy Hart; Aunt Mary Benz; several first and second cousins and granddog Milo.  Friends are invited to call Saturday, December 26th 2:00-4:00 p.m. and Sunday, December 27th 2:00-4:00 p.m. at J.W. Embser Sons Funeral Home, 34 W. State Street, Wellsville. Due to COVID-19, a private Mass of Christian Burial will be celebrated later. Friends are asked to join his family at a graveside ceremony on Monday, December 28th at 12:15 p.m. at Sacred Heart Cemetery. Donations may be made to Immaculate Conception Church, 17 Maple Avenue, Wellsville, NY 14895, or the Emerald Hook & Ladder Company, 40 S. Main Street, Wellsville, NY 14895.

Susan L. Reed, 60, of Scio, NY, died Thursday, March 26, 2020 in Jones Memorial Hospital, Wellsville.  Born April 14, 1959, in Wellsville, she was the daughter of Maxwell E. and Marguerite Cole Halladay. She was married to Wayne P. Reed, who survives.  A graduate of Wellsville High School, she was a homemaker and a lifelong area resident. Susan loved her dogs, cats, and birds and enjoyed crocheting.  Surviving besides her husband, Wayne, are: her mother, Marguerite Halladay of Wellsville; two children, Joni Stoneham Croley and David Stoneham, Jr., both of Wellsville; a granddaughter, Abby Stoneham; a step-son, Michael Moore of Sunbury, PA; a brother, Maxwell (Daphne) Halladay, Jr. of Wellsville; a sister, Sara (Ronald) Phippen of Leola, PA; aunts, uncles, nieces and nephews. She was predeceased by her father; and a niece, Virginia M. Halladay.  The family will hold a memorial gathering on a later date. Burial will be in Yorks Corners Cemetery. Memorials may be made to the American Diabetes Association at www.diabetes.org or the SPCA serving Allegany County, P.O. Box 381, Wellsville, NY 14895.

Donald E. Cole, 61, of Belmont, NY, formerly of Friendship, died Sunday, October 18, 2020 in his home.  Born August 20, 1959, in Wellsville, he was the son of Walter and Alice Demick Cole.  A 1977 graduate of Wellsville Central School, he never went to school on Mondays and Fridays.  On August 6, 1994, in Scio, he married the former Robin L. Cummins, who survives.  He was employed by Mackler Industries in Friendship, Brass Enterprises in Florida, and Turner & McNerney Pipeline Contractors, Inc, Wellsville.  Don operated Allegany County online garage sales, a sports cards shop, and Cole’s bouncy house rentals.  He enjoyed riding an working on motorcycles, and wheelin’ and dealin’, and cooking.  Don loved his many animals, especially his dog, Bear.  Surviving besides his wife, Robin, are:  a daughter, Carina (Adrian) Watson of Belmont;  two brothers, Walter Cole, Jr. of Friendship and Brian (Judy) Cole of Wellsville;  nieces and nephews;  and special friend, Sue Fanton Sekoll.  He was predeceased by parents.  Cremation was at Olney-Foust Crematory.  A gathering to celebrate Don’s life will be held at the Wellsville Rod & Gun Club on Saturday, October 31, 2020, beginning at 1:00 p.m. Memorials may be made to a charity of the donor’s choice.

Philip W. Stout, formerly of Wellsville went to be with his Lord on Sunday (Jan. 5, 2020.)  He was born in Wellsville on Feb. 24, 1959 to Allen and Hilda (Church) Stout. He grew up on a dairy farm that also produced maple syrup, and participated in 4-H, and Junior Grange. He was a liturgist and active in youth group at the Christian Temple in Wellsville during high school.  Philip graduated from Wellsville High School in 1977. Throughout high school, he was involved with choir and drama.  He was a cast member for productions of Fiddler on the Roof, Oklahoma, Sound of Music, and South Pacific and a member of the high school madrigal singers and chorus. He was a Junior National and National Honor Society member.  Philip graduated from Alfred University with a BS in Ceramic Science in 1982. While there, he was in the cast of Cole Porter’s Kiss Me Kate, Androcles and the Lion, The Time of Your Life and several student written productions. He sang with the Alfred University Chorale and a local barber shop group.  Philip worked for Maida Corporation, Hampton, Va., and briefly for Olean Tile in Olean; then he returned to work at Maida Corporation. Philip had a green thumb with house plants and enjoyed gardening.  As a single adult, he enjoyed camping and canoeing with his older siblings in the Adirondacks.
Most recently, at First United Methodist Church Foxhill, Hampton, Va. Philip sang in the chancel, taught Sunday School, acted as the chairman of the church council, and as a certified lay servant he served as the lay leader for the church. He attended and helped facilitate Walk to Emmaus groups and was a member of the Peninsula Rainbow Emmaus Community and the Tidewater Emmaus Community.  Philip Stout is survived by his son, Joey (Davida) Stout and grandson, Dustin Stout from Virginia and siblings David (Janet) Stout, Sharon Stout and Shirley (Thomas) Kowalik from western New York and a total of seven nieces and nephews.  He was predeceased by his parents.  Funeral arrangements in Virginia are through Hayden Smith Funeral Home, 245 South Armstead Ave., Hampton, Virginia.  A memorial service will be held in Virginia at the First United Methodist Church Foxhill, Hampton, Va. on Saturday (Jan. 18, 2020) at 11:00 a.m.  A service will be held in the Wellsville area at a time convenient to Philip’s New York family. Local arrangements are under the direction of Baker-Swan Funeral Home, 3256 Riverside Drive, Wellsville.  Donations in Philip’s memory may be made to Thelma Rogers Genealogical and Historical Society of Wellsville, 118 East Dyke Street, Wellsville, NY 14895, or to a charity of the donor’s choice. 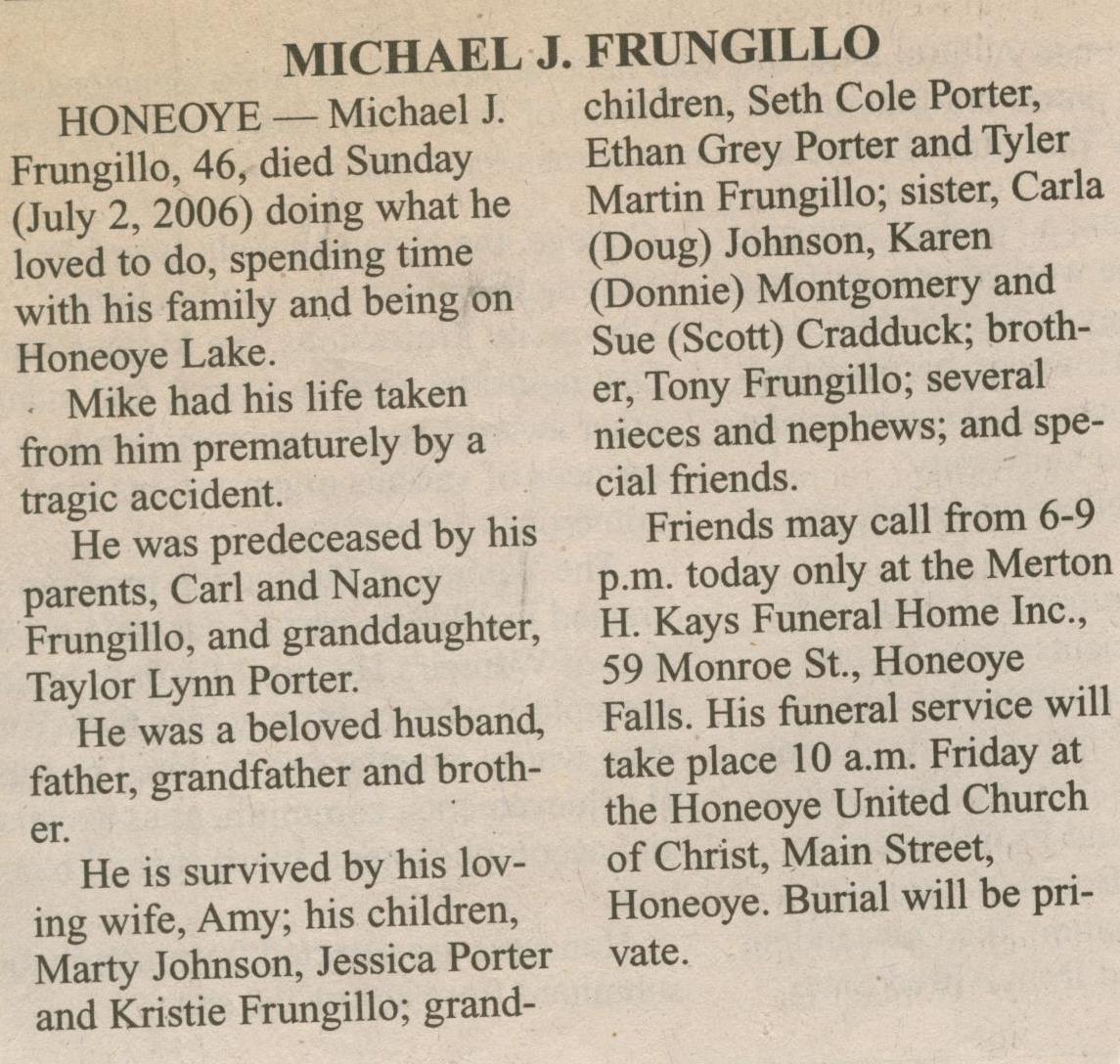 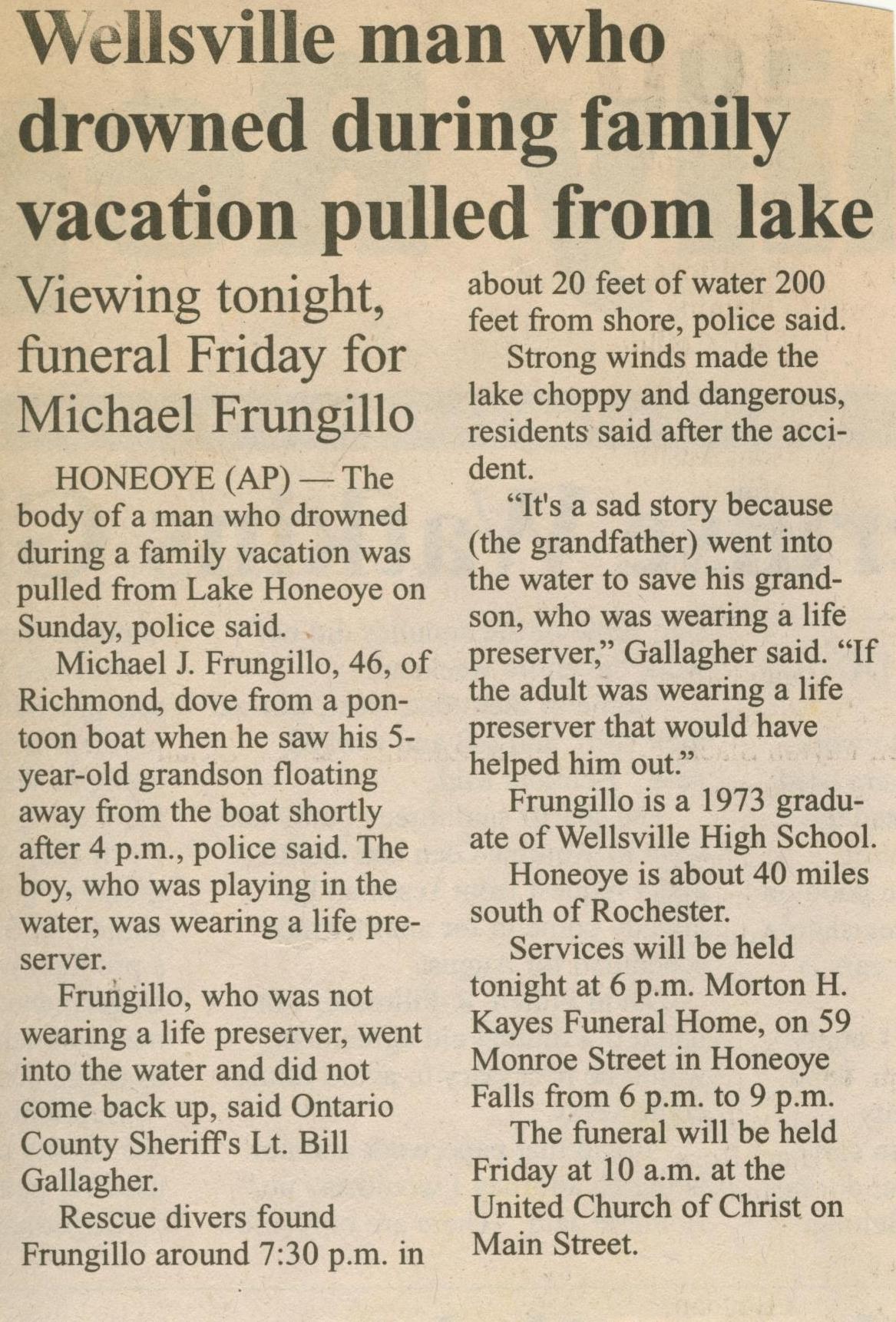 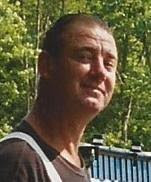 Fred C. White, 57, of 3463 County Road 28, passed away on Saturday, June 27, 2015, at home, with his family at his side. He was born May 4, 1958 in Cuba. On July 22, 1979 in Perryton, Texas he married Alice M. Gaines who survives. Fred was a 1977 graduate of Wellsville High School. He was employed by Wellsville Central School during his high school years and for the Town of Wellsville in the summer months. He moved to Perryton, TX in 1978 to work in the oil fields; and returned to Wellsville in 1985. He later worked for Air Preheater Company in Wellsville. He attended Yorks Corners Mennonite Church. He loved nature, animals, flowers, birds and making children laugh.  Surviving in addition to his wife Alice, is one daughter, Tiffany (Timothy) Brechbill of Rocky Mount, NC, two sons, Daniel (Heidi) White of Palo Alto, CA and Dustin (Julie Eldridge) White of Wellsville, three grandchildren, Timothy and Naomi Brechbill and Chase White, one brother, Leslie White of Wellsville, a sister, Linda Yaras of Austin, PA, as well as several nieces & nephews. He was predeceased by his mother, Freda (Goodwin) White Mulvey in 1987, one brother, Leon White Jr., and three sisters, Luella, Lucy, Lila White all in 1960.  Friends are invited to call on Monday, June 29th from 7:00 to 9:00 pm at the J. W. Embser Sons Funeral Home Inc. in Wellsville and on Tuesday, June 30th from 11:00 am to 1:00 pm at the Yorks Corners Mennonite Church. The funeral will follow visitation at 1:00 pm Tuesday at the Church. Burial will be in Forest Hill Cemetery in Austin, PA. The family suggests memorial donations be made to the SPCA Serving Allegany County or Penn-York Camp in Ulysses, PA. 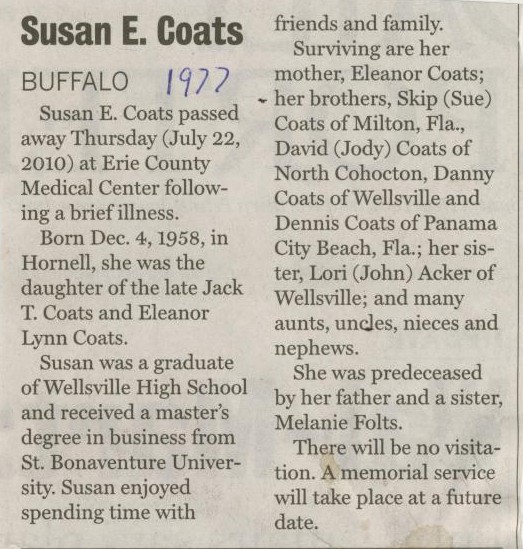